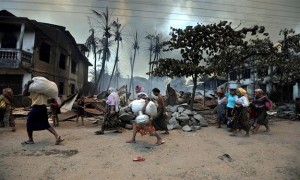 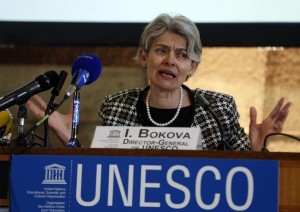 Against the backdrop of the Saudi air strikes continued on Yemeni cities and destroyed all modern buildings and ancient heritage, the Director-General   of the UNESCO Irina Bokova crossed her displeasure of air strikes of the military Saudi to the buildings of the old city of Sanaa, warning with that the risk of the demise of the authentic cultural heritage , which reflects the identity of communities and their culture .

Bokova in a statement published in the official website of UNESCO called to ‘’stop immediately targeting the historic old residential neighborhoods , and that does not hurt architectural and cultural heritage during conflicts as well , and respect for the 1954 Convention for the Protection of Cultural Property in the Event of Armed Conflicts’’ .
‘’ these attacks came a few days after the destruction of the Temple of God ” Nakereh ”, which dates back to the first century BC and part of the old city walls of the archaeological site ” Baraqish ”, and also too many cases of destruction of museums and archaeological sites in Yemen’’ added Bokova .
The old city of Sanaa, which were included in the World Heritage List in 1986 became inhabited for more than 2,500 years , and is ranked among the Top 25 tourist landmark in the world , most of the buildings are : mosques and baths and tower Houses and red brick Houses all of this form and highlighted showed the beauty of the area and it became a tourists Destination par excellence , and was surrounded by a huge mure on all sides , but did not hold for long time in the face of wars that plagued the city in ancient times , and also the old city of ‘’ Chabam ‘’ and the Historical town of ‘’Zoubid ‘’ added in the list of the World ‘s Heritage in Danger in 2000 .